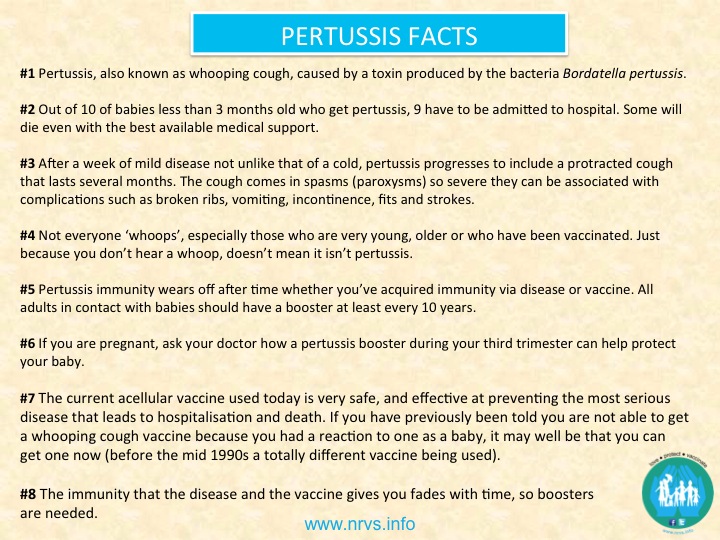 Whooping cough is a disease that has affected many of our members. Here are some of their stories; 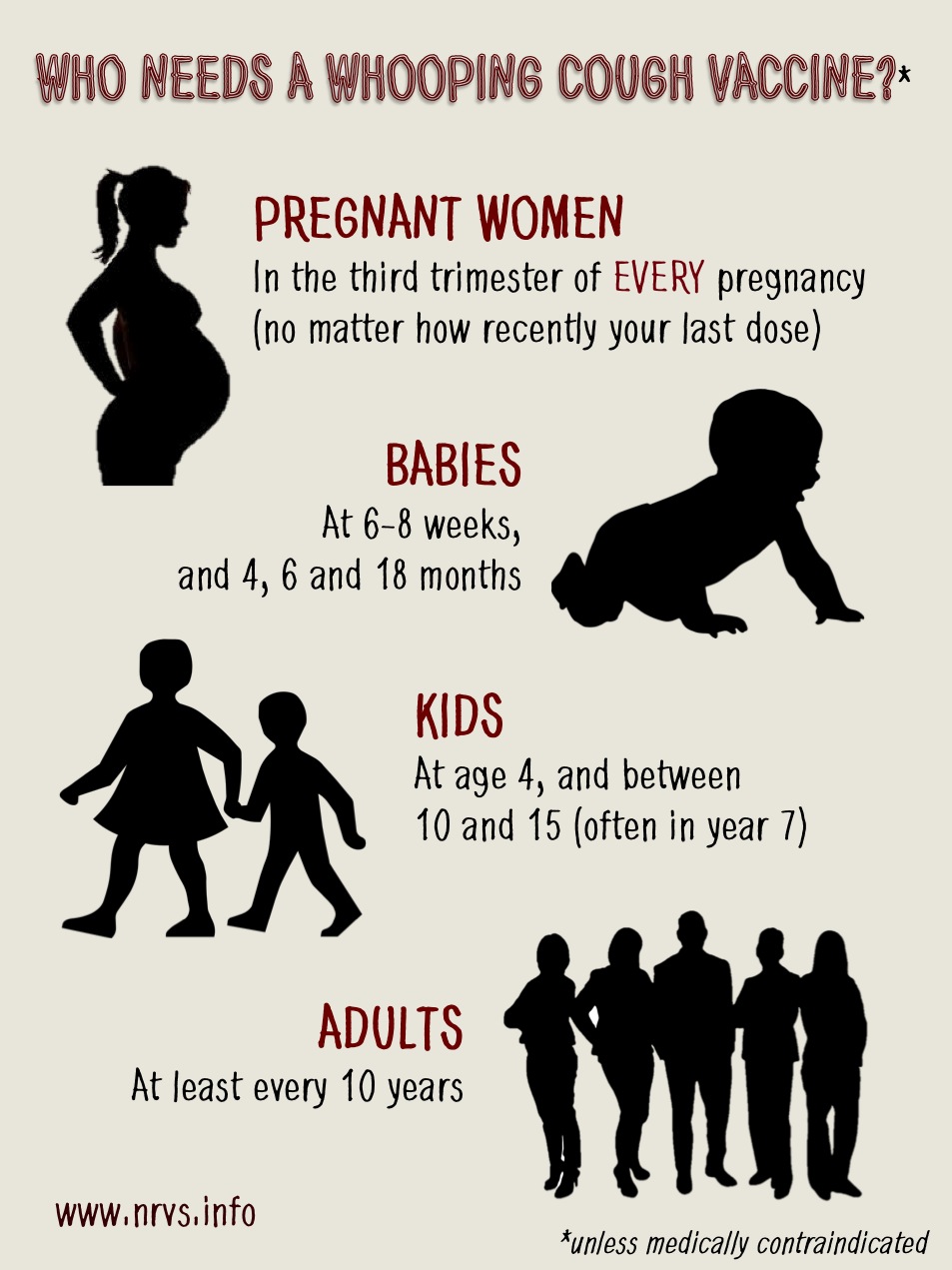 A summary on how to protect new babies from pertussis.

For a summary on the latest information about whooping cough, why we are still having outbreaks, and what we can do to protect our families and our communities we have written a summary article published via kidspot which can be access via this link. 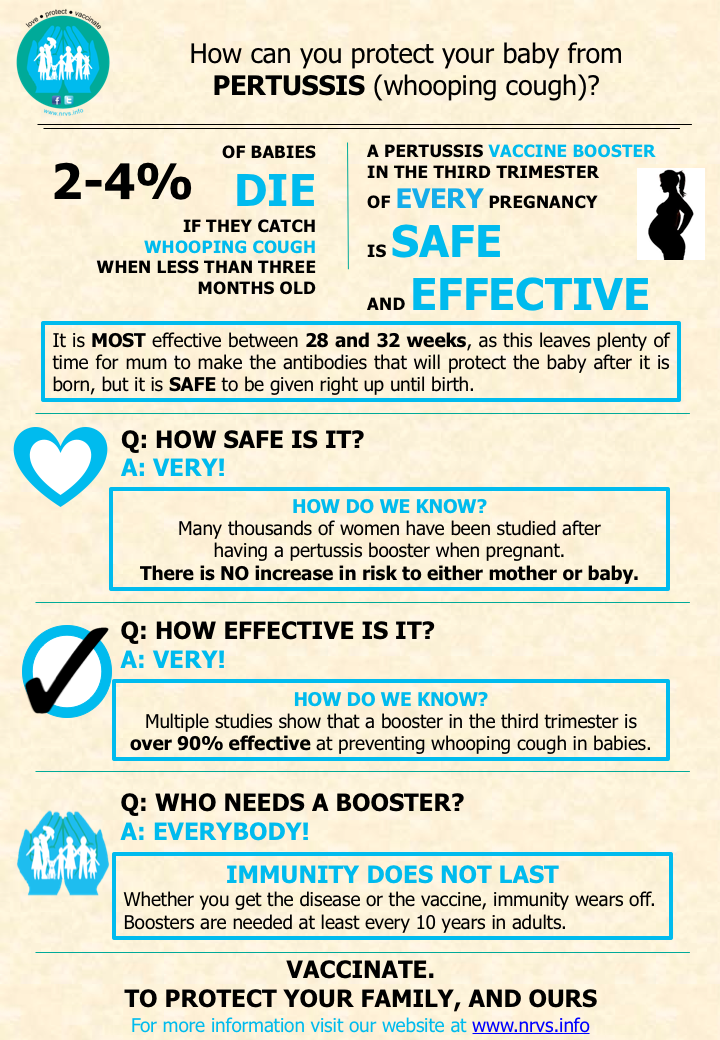 Facts about pertussis, the disease, and how to prevent it.

Pertussis is the disease also known as whooping cough, caused by a toxin from the bacteria Bordetella pertussis.

It is spread by droplets when an infected person coughs or sneezes, or via direct contact with secretions from the nose or throat, and the time between exposure and development of symptoms is usually 7–21 days.

Whooping cough has a gradual start, with little to no fever, and a mild cough. This gradually worsens over 1 – 2 weeks. This is the most infectious stage of the illness, but often it is not diagnosed during this time, as the symptoms are relatively mild. In other words most people will have passed it on long before they realise that they have it.

During the second week of illness, the cough gets worse until there are repeated violent bouts (paroxysms) of coughing often, but not always, followed by a characteristic whoop as the person takes a big breath in at the end of the paroxysm. After the paroxysm has passed, the person may vomit or pass out. Coughing can be triggered by activities such as laughing, yawning, talking, and exercise. Breathing in steam, smoke or other irritants can also cause a paroxysm and it is often worse at night.

Coughing of this intensity can last for 2 months or longer, and the total duration of the illness is often about 3 months.

In people who have previously had the disease, or who are immunised, this pattern of disease does not always occur, may be much milder, and may not have the same characteristic features.

This is a video of a baby with pertussis. Warning: this link features a baby having a whooping cough attack. It is confronting, don’t watch it unless you are feeling strong, or want to show someone who may have doubts about just how serious a disease it can be.

In adolescents and adults, paroxysms of coughing can be so violent as to cause rib fractures, the development of hernias, incontinence (for both urine and faeces), vomiting and fainting. Rarely, more serious complications can occur such as intra-cerebral bleeding, strokes, and fits.

In babies, the disease may cause difficulty in feeding, vomiting and gagging, periods of apneoa (stopping breathing), cyanosis (turning blue through lack of oxygen), bradycardia (slowed heart rate), pneumonia, and seizures.

About half of all babies less than 1 year old will need admitting to hospital, of those;

Data from the UK looking at all cases of pertussis from 1998-2009 found an overall case-fatality (CFR) among infants with laboratory-confirmed pertussis of 24 deaths/1,000 cases (that is, 2.4 deaths per 100 cases). This does vary according to the age of the infant, with the worse death rate of 43/1000 in infants 28-55 days old (in their second month of life). 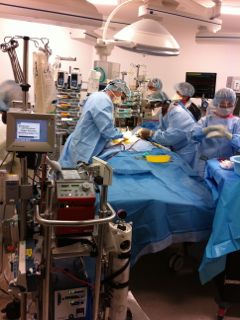 This picture shows just a child being put onto ECMO. A team of experienced critical care clinicians are battling to try and save a life.

There are several reasons why pertussis is so dangerous in very young infants, especially when they are too young to be vaccinated themselves. They are also much smaller and more vulnerable to the violent paroxysms of coughing, but also in very young infants, the disease can cause a very high white cell count (lymphocytosis). If this occurs these blood cells can cause a mechanical obstruction in the blood flow to the lungs, which in turn means that the baby cannot get enough oxygen into their blood, and their heart struggles to pump against the blockage. At this stage sometimes the only option is to use ECMO (extra-corporeal membranous oxygenation), which involves taking the blood out of the baby, running it through a machine to put oxygen in and take carbon dioxide out, and then returning the blood to the baby. If this is required, sadly, the chances of survival are very slim, with a mortality of around 70%.

ECMO is a supportive therapy of last resort, it does not cure, but is an attempt to maintain life whilst the disease runs its course. In principle, it is similar to a cardio-pulmonary bypass machine (like the technology that is used for open heart surgery), but patients who need ECMO may have to stay on this machine for weeks. This, sometimes, can save a life, but it is associated with a lot of complications, and sometimes, sadly, even ECMO is not enough. For more information about ECMO here are some notes from the Great Ormond Street Hospital for Children in the UK.

How contagious is it?

It is spread by droplets when an infected person coughs or sneezes, or via direct contact with secretions from the nose or throat. The time between exposure and development of symptoms is usually 7–21 days.

Whooping cough is most infectious in the early stages of illness when the disease is very similar to a common cold, so often by the time people realise how serious it is, they have already passed it on.

It is very contagious, as evidenced by the fact about 90% of susceptible people in close contact with a patient will contract it (susceptible means unvaccinated, overdue a booster, or having not had the disease previously).

Treatment is supportive. This means that there is no specific treatment available to cure you once you have the disease. Rather, the aim has to be to support the function of the body, and life, whilst time passes and the natural course of the infection passes.

Antibiotics do not make any difference to the course of the disease. This is because it is the toxin, not the bacteria, that causes the damage. Antibiotics may get rid of the infection, but they do not make any difference to the damage that the toxin has caused. They are, however, given early on in the course of the disease in order to reduce the chance of passing the infection on to others. Preventative antibiotics may also be given to close contacts of patients (especially very young infants) to try and prevent them getting disease. Known contacts may also be offered a vaccination booster.

Prior to the 1990’s a whole-cell pertussis vaccine was used. Although it led to lasting immunity, there were concerns that it was causing some serious side effects. The current vaccine used today is safe, and effective at preventing severe disease, but the protection it leads to does not last as long. The current vaccine is called ‘acellular’ as it does not contain the whole bacteria (it therefore can also not possibly cause the disease).

Current recommendations in Australia are for women to get a booster in pregnancy, and then all children to get a primary course with a dose at 2, 4, and 6 and 18 months, a booster at 4 years, and a further booster between age 10-15.

As with any vaccine, the pertussis vaccine is not 100% effective, it does not put up a force field around you, and does not confer life-long immunity. Vaccine effectiveness is estimated to be 68% after receiving 1 dose, increasing to 92% after the 2nd dose, and greater than 99% following subsequent doses. Immunity to disease decreases over time post vaccination with estimates of protection remaining for 4–12 years.

Adults who wish to protect themselves from pertussis should get a booster every 5-10 years.

To maximise protection for the most vulnerable age group (babies less than 3 months old) the following strategies are suggested; 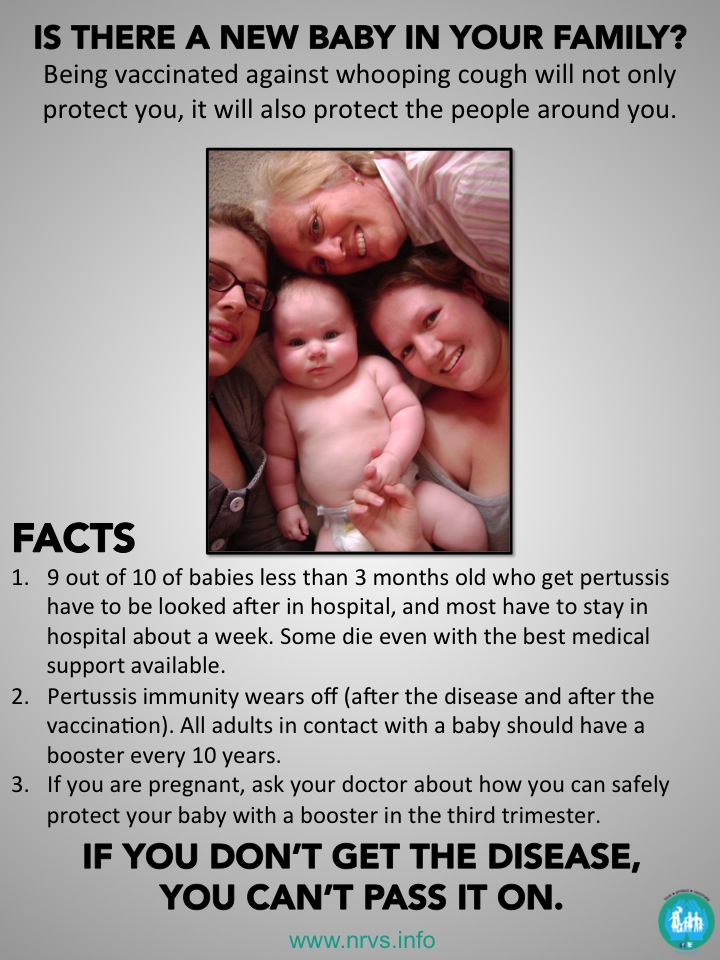 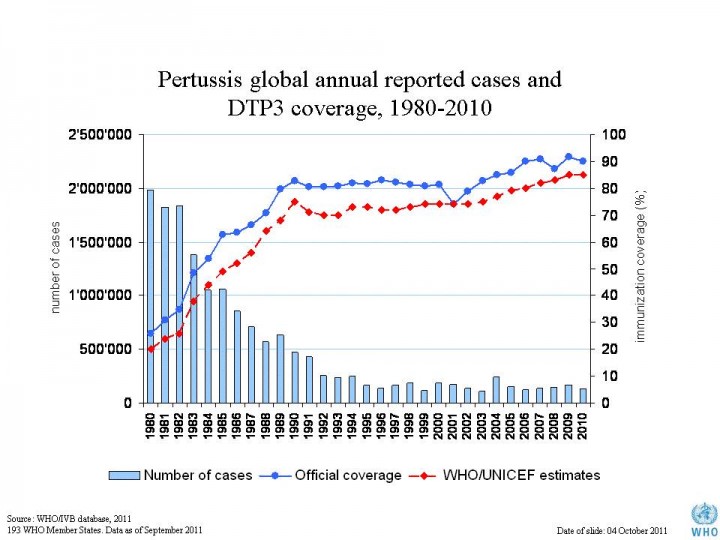 The pertussis vaccine does work, and as this graph shows, the more people that are vaccinated, the less disease there is.

Adverse events to any vaccination can and do occur. However, these are usually very minor, or extremely rare. Adverse events are far less common with the current acellular vaccine than the previous one. A transient (short lived) fever or a sore arm are the most common, occuring in 10-20% of people. In approximately 2% of people receiving boosters there can be extensive limb swelling, such reactions are noticed within 48 hours of vaccination, last for 1 to 7 days and resolve completely without any lasting effects. Although the swelling can be extensive, it is not usually associated with any pain or loss of function. 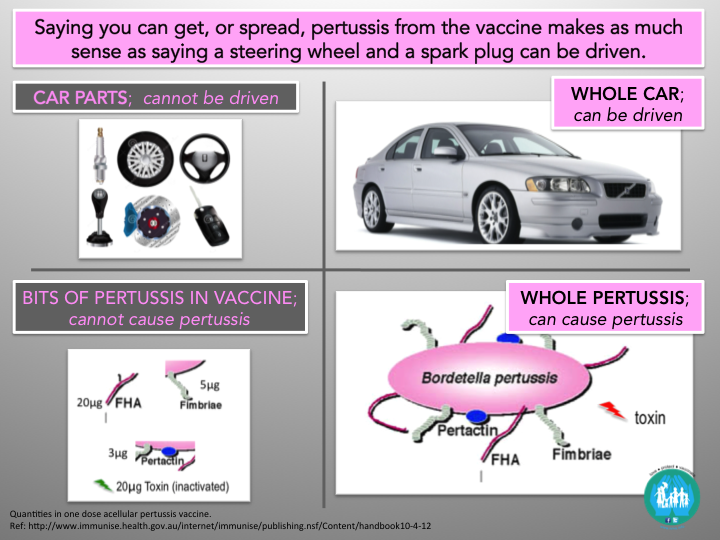 Can you still spread whooping cough if you are vaccinated against it?

Firstly, the vaccine itself cannot cause the disease as it does not contain the bacteria itself, just fragments of it.

No vaccine is 100% effective, and it is always possible to get a disease even though you are vaccinated against it. There are a number of reasons why this can occur, and for more information about that please take a look here. And of course if, despite the vaccine, you get the disease, you can then pass it on to others.

There is also some evidence that if vaccinated you can carry the bacteria in your body without being sick (this is called asymptomatic), and that therefore there is a theoretical risk you could pass it on. However, if you are not sick, you are very unlikely to pass it on to anyone else, as the disease is spread via coughing.

There is not a lot in life that is ‘all or nothing’, ‘black or white’, ‘100% or 0%’; and this is one of those occasions. So in response to the question, ‘can you still spread whooping cough if you are vaccinated against it?’ the answer is ‘yes, it is possible, but the risk is very much reduced. 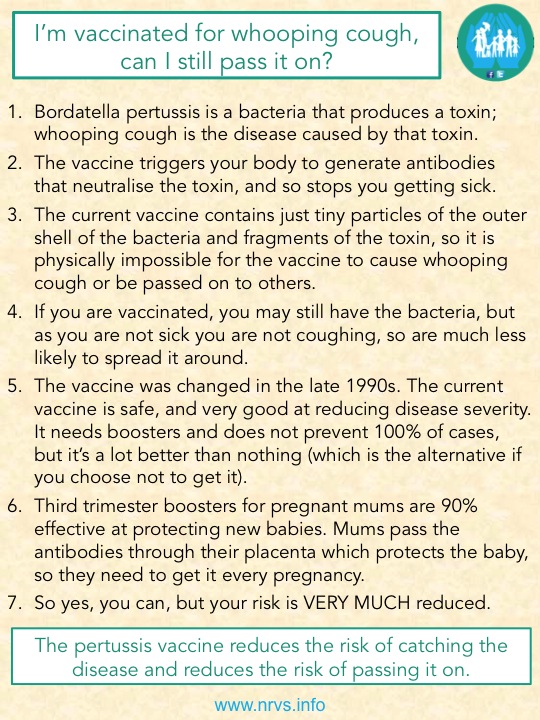