When I was 16 I contracted meningococcal infection, spent time in hospital, and had my life changed completely.

I grew up in Byron Bay, NSW and had an active childhood with lots of time spent on the Aussie ski hills thanks to my father’s passion for the sport.

In September 2002 I returned from a school ski trip to Jindabyne, it had been a fun trip spent in a camp environment, skiing all day and lots of late nights. I was pretty exhausted by the end of the week as most teens are after a school camp. Within a few days of returning home I started to feel very lethargic and unwell, it felt like every muscle in my body was aching. I got sent home from school and my mother was advised over the phone to give me rest and paracetamol.

Over night I got worse, became delirious and was not able to call out to wake my parents. In the morning I was covered in a purple rash and could barely walk.

We rushed into Byron Bay hospital where they immediately transferred me to Lismore Base Hospital where I was put into a medically induced coma for two weeks.

I think this time was more difficult on my parents and family than it was for me. They were told I had a 5-10% chance of surviving and they watched as the circulation in my feet began to fail. Both feet had to be amputated and I had multiple operations where it was a constant struggle to control bleeding. At one point it looked like my hands were deteriorating as well but fortunately they were able to be saved. Even though I was unconscious I was aware of time passing and had lots of unusual lucid dreams that influenced by what was going on around me. When I woke up I knew I no longer had my feet but didn’t realise how close I had come to death.

The next few months seemed like a gift. I spent another 5 weeks in Lismore Base and then went onto inpatient rehabilitation for 3 months. I was the youngest patient there and worked hard with the physiotherapists, prosthetist and other staff to regain the ability to walk and be independent.

Interestingly one year later under the same conditions my younger brother became unwell. My mother was vigilant to the signs of meningococcal and took him straight to emergency. He ended up also having contracted the disease but thanks to my mother’s quick actions was able to receive the antibiotics needed immediately and did not have any lasting effects from the illness. It is likely that we have a susceptibility to the disease as a result of an immune deficiency.

During my time in rehabilitation I learnt about the possibility of being able to ski again using specific prosthetics for skiing and after a time I was able to get back to the sport with the help of Disabled Winter Sports Australia. In 2010 I competed at the Winter Paralympics in Vancouver and I won a silver medal in the Alpine Downhill event. It was an incredible sense of achievement and symbolised overcoming the permanent impact of losing my legs to meningococcal infection. In 2010 I also started studying medicine and married my wife, Daria. It was a big year. 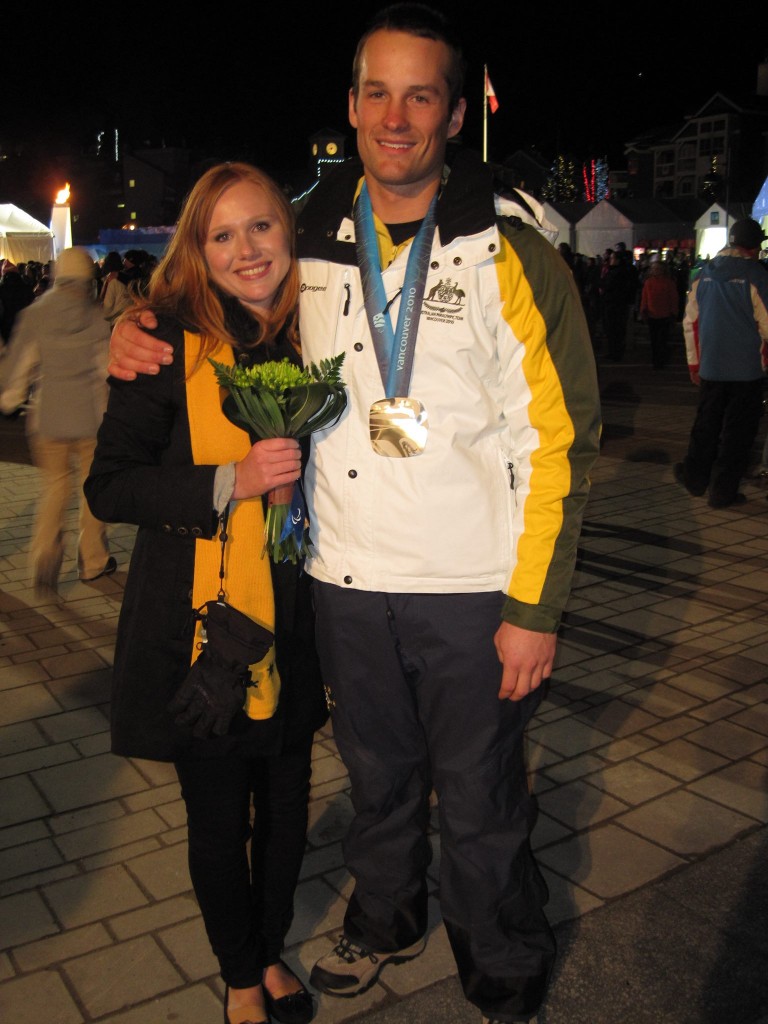 I have recently returned to Lismore Base Hospital to commence work as a doctor.

It is amazing to be back in the place where my life was set on a new path but also became inspired to pursue a career in health.

In 2014 Daria and I welcomed our first child into the world. There was never any doubt that we would be vaccinating Hugo on time and on schedule. We have both seen the devastation that vaccine preventable illnesses can cause. Included in the childhood immunisation schedule are vaccines for Meningococcal C and pneumococcal but not for Meningococcal B, which is the type I had. Excitingly a new vaccine, Bexsero was recently developed, tested and approved for use in Australia. We jumped at the chance to provide Hugo with the vaccine and chose to do it from 6 months because children under 2 years old have the highest number of cases of meningococcal B, and unfortunately most are not as lucky as I was.

Although I’m proud of what I have achieved and wouldn’t change my own situation I am so glad that we are able to provide Hugo with the best chance of avoiding the horrible meningococcal B infection and its complications.