Have you been told that there are aborted babies in vaccines, or that aborted foetuses are sold by the hospitals to vaccine manufacturers?

The simple answer is that this a blatant and outrageous lie.

To make some vaccines, the vaccines viruses are grown on descendants of cells removed from 2 foetuses aborted for medical reasons half a century ago. The foetuses were not aborted intentionally for the purpose of vaccine development.

The foetal cells were used to begin the cell lines which have since divided and multiplied independently. The descendant cells never formed part of the original foetus.

In nature, viruses need cells in which to grow and reproduce in and in order to make an effective vaccine against these viruses, vaccine makers need to grow the virus inside actual cells (such as in chicken embryos or animal cells). Sometimes they use cells descended from human tissue because it is very hard for some viruses that infect humans to be grown in any other type of cell, and during the vaccine manufacturing process the virus has to be grown and replicated as part of the way it is weakened (attenuated) so it cannot cause disease people. Once replicated and attentuated, the vaccine virus is then extracted and isolated from the growth medium.

Human foetal cell lines are used rather than adult cell lines because they divide much more rapidly, and it is safer to use human originated (rather than animal), cell lines for development and manufacture of vaccines for humans.

Four of the vaccine viruses – Hepatitis A, Varicella, Rubella and Rabies, use a growth medium of human cell lines, and in those vaccines, cells descended from foetal cells are not an ingredient but a growth medium.

Much like how carrots need soil in which to grow, vaccines use cells to grow the viruses in. And just like eating a carrot is not the same as eating the soil, injecting or ingesting a vaccine is not the same as injecting or ingesting the growth medium. The final vaccine does not take on the characteristics of a human embryo or its DNA any more than a carrot takes on the characteristics of the soil it grows in. Soil contains rotting organic material, fertiliser, worms, insects, fungus, bacteria, dead animal remains and faeces. These are all vital and necessary elements that enrich the soil and ensure the carrot is nourished. It would be false to suggest a carrot contained all of those things inside it, just because it needed those things to grow. 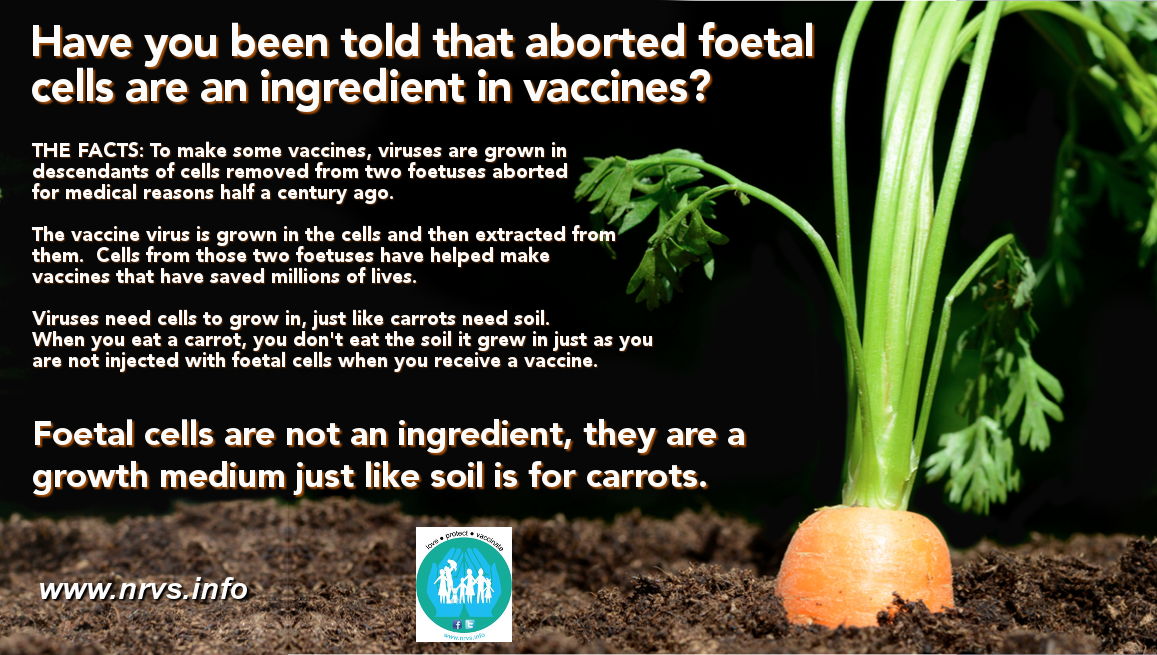 It is completely and utterly false that babies are continually aborted and supplied for vaccine manufacture. The single source for the entire world’s production of the four vaccines are descendants of lung cells of two foetuses, one aborted in the US in 1961, the other in the U. K. in 1966. Neither abortion was performed for the purposes of creating the cell lines.

The cells are now replicated, so there is no need for any more fetuses. Cell lines are useful exactly because they can be replicated (copied) and they provide a reliable, uniform, controlled place to grow the vaccine virus.There is one other way foetal tissue has gone on to help in vaccine development, and that is that the rubella virus used to create the attenuated virus for rubella vaccine was isolated from a foetus aborted due to congenital rubella syndrome. Before the rubella vaccine, rubella infection during pregnancy was a leading cause of miscarriage and neonatal death, and caused hundreds of thousands of infants to be born with congenital rubella syndrome worldwide. This vaccine alone has gone on to save millions of lives.

Some people may worry that vaccinating their children may go against religious or personal beliefs about abortion. However, major religions all support the practice of vaccination, including using the few vaccines grown on cell lines, and are assured that vaccines prevent disease and save lives.

In a statement by the Catholic Church the followng points are made “It is important to note that descendent cells are not the cells of the aborted child.” and “One is morally free to use the vaccine regardless of its historical association with abortion. The reason is that the risk to public health, if one chooses not to vaccinate, outweighs the legitimate concern about the origins of the vaccine. This is especially important for parents, who have a moral obligation to protect the life and health of their children and those around them.”

There are very tight and very strict laws regarding human medical waste, including aborted foetuses. There is NO reason for vaccine producers to use them as they have a perfectly acceptable and ethical resource of the existing cell lines to use.

And once again - we have more data showing that covid vaccines are really good at preventing serious disease. This time out of the USA.I’ll keep this brief, because the data speaks for itself.On January 20, the CDC updated their COVID-NET data looking at the rates of laboratory-confirmed COVID-19 hospitalisations by vaccination status up to December 25.The data shows that in December, the monthly rates of COVID-19-associated hospitalisations were 16x higher in unvaccinated adults aged 18 years and older. In adolescents aged 12-17, the rate of hospitalisations were 9X higher amongst the unvaccinated.The chart attached shows the age-adjusted rates of COVID-19-associated hospitalisations by vaccination status in Adults Ages ≥18 Years from January–December 2021.It really speaks for itself.Are the vaccines actually stopping us from catching the virus? Clearly, they haven’t been as effective at providing sterilising immunity. This has been acknowledged, repeatedly.But what the vaccines are doing is reducing the risk of those with COVID requiring hospitalisation or dying from the disease. This has been made very clear by all the data sets.Would we love a sterilising vaccine? Of course! But we currently do not have this at our disposal. What we do have are vaccines which are preventing catastrophic levels of hospital admission and death. So whenever you are being bombarded by cherry-picked data from the anti-everything brigade, whenever you are being subjected to the false claims made by vaccines skeptics, always remember that facts matter. Evidence matters. Science matters.If you’re getting advice from people who shared the documented fake story about a young Australian child dying post COVID vaccination, you need to really find a more reliable source of reference.- SaraCDC Data Set covid.cdc.gov/covid-data-tracker/#covidnet-hospitalizations-vaccination ... See MoreSee Less
View on Facebook
· Share

"If you are triple-vaxxed, and you do your very best to ventilate a space and be careful about interactions, there are examples of people to have managed to confine an infection to one person. So, don't give up." ... See MoreSee Less

'Surely I've got it': When Nicola got COVID, her partner thought she was next. So why didn't she catch it?

An effective pandemic response requires clear rules and thresholds that tell us how to judge COVID-1...
View on Facebook
· Share

We recently shared a graph of outcome data stratified by age and vaccination status from the uk.The Guardian has just published a graph of the Australian data. It shows exactly the same trends — that vaccines are working really well at preventing serious outcomes from Covid. Link to graph of Australian data:www.theguardian.com/australia-news/datablog/2022/jan/21/australia-has-had-its-deadliest-day-yet-c...Link to graph of UK data: www.icnarc.org/DataServices/Attachments/Download/93440802-6975-ec11-913a-00505601089b ... See MoreSee Less
View on Facebook
· Share

Being vaccinated helps protect people from dying from covid. These graphs are from Our World In Data: two graphs side by side with up to date Australian statistics. • The x axis on both shows the date (from Feb 2021 to Feb 2022). • The y axis shows a rate: the graph on the left shows the vaccination rate, the graph on the right shows the case fatality rate (how many people who are known to have covid are dying from it). What these graphs show is that as the vaccination rate goes up, the rate of death goes down. Being vaccinated helps protect people from dying from covid. “Our world in data” is a resource that is free to explore for anyone. Link to it in comments. ... See MoreSee Less
View on Facebook
· Share

Q: if I get covid will I be protected and immune from catching it again?A: No. You can get sick with covid multiple times.www.theguardian.com/world/2022/jan/21/covid-reinfection-how-likely-are-you-to-catch-virus-multipl... ... See MoreSee Less
View on Facebook
· Share