What is herd immunity?

Most infectious diseases are caused by germs that are spread from person to person. In many cases, these germs can only survive, thrive and multiply if they can find vulnerable ‘host’ people to inhabit. If people are protected by vaccination, then there aren’t any available ‘hosts’ for the germs to live and thrive in.

In this way, if a vaccine is effective enough, and if enough of the population get vaccinated, the amount of disease in the community gets less and less, until if there are only a few people who are not vaccinated, then they are protected too.

A simple way of thinking of this is “If you don’t catch a disease, you can’t pass it on”.

This concept is known as ‘herd immunity’ or ‘community immunity’, and is such a powerful mechanism in the right circumstances it can lead to the control or eradication of disease. It is through this mechanism that smallpox has been eradicated, and polio is virtually unheard of.

Herd immunity does not apply to all diseases, nor all vaccines. Tetanus for example, lives in the soil so you don’t catch it from a person, and so it is only your own vaccination status that confers any protection (the vaccination status of those around you has no influence on your own risk). Herd immunity is also a concept considered only in the control of disease by vaccine, not by allowing uncontrolled spread of disease. 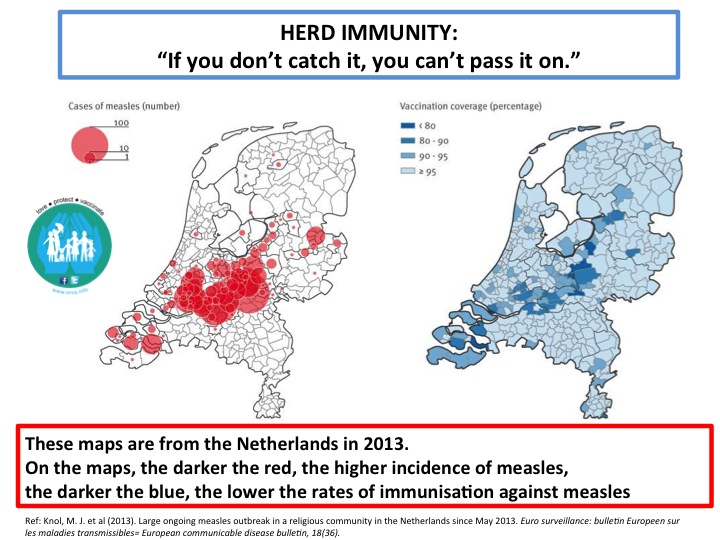 (Map taken from Surveillance data, measles epidemic in the Netherlands, 2013)

This then means that everyone in the community is protected, even those who cannot be immunised because they are too young or too sick. It also protects those who have not yet completed the whole course because of their age.

This graphic demonstrates this. 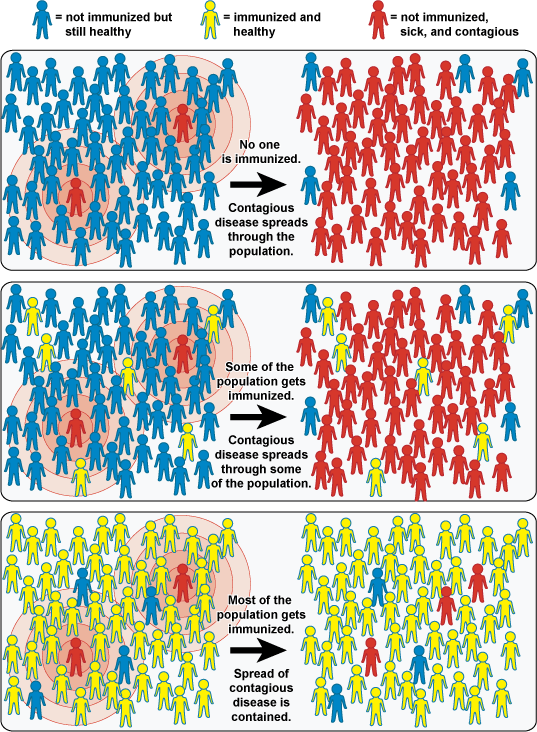 In some cases, where humans are the only known reservoir or host of a particular vaccine preventable germ, herd immunity can mean that a disease can be totally eradicated, and then no one would ever be at risk of that disease again. ie if a virus or bacteria can only live in humans and is not found in soil or other animals, eradication of that disease is possible. Humans are the only known hosts of smallpox, measles and polio.

And it is via this mechanism that smallpox no longer exists. We no longer need to get vaccinated against it because of a global vaccination campaign and the science behind herd immunity.

Through this mechanism there is a very real possibility polio could be eradicated within our lifetimes. For more information about polio eradication, have a look at these 10 facts described by the World Health Organization. And IF we could vaccinate enough of the population against measles, there is a change we could also rid the globe of that disease too.

Different diseases and different vaccinations have different levels of ‘herd immunity’, because it varies according to how effective the vaccine is, how long the vaccine is effective for, and how contagious the disease is.

Vaccines do not work as a total ‘force field’ around someone. Instead, they prime the body’s immune system to recognize germs, so that if they are encountered in real life, the body is ready and strong and boosted and prepared to fight off disease. Each dose of a vaccine strengthens this response, and some vaccines need a course of doses to ensure adequate protection. If you are incompletely vaccinated, or immunocompromised, whether through choice or through age or through illness, you are dependent on herd immunity to protect you.

For most vaccine preventable disease, it is vital that it is children that are amongst the most highly immunised. Day care, pre schools, schools, kindergartens, and play groups are all places where people meet up and mingle in groups. And children share their germs far more than adults do, which is why we all know that coughs and colds (for example) ‘spread like wildfire’ through pre-schools.

It is also in childcare centres and kindergartens that there are lots of children who are incompletely vaccinated because they are too young to have completed the course, and it is there that kids have baby siblings who are too young to have been vaccinated. In the event of an outbreak of vaccine preventable disease, unvaccinated children may be asked to stay away from school to prevent further spread of disease, and to protect those who are undervaccinated or susceptible to disease through no choice of their own.

If enough of the population refuses to immunise themselves and their families, it is a chink in the armour of herd immunity, and you can get clusters, or pockets, of disease that can start up.

In the Northern Rivers of Australia, the number of people who have refused to vaccinate their families has meant that we are below the herd immunity threshold for some diseases. This means we are now at real risk of epidemics of preventable infectious disease, and already have higher than necessary rates of vaccine preventable diseases in the area, as demonstrated by this data from 2009. 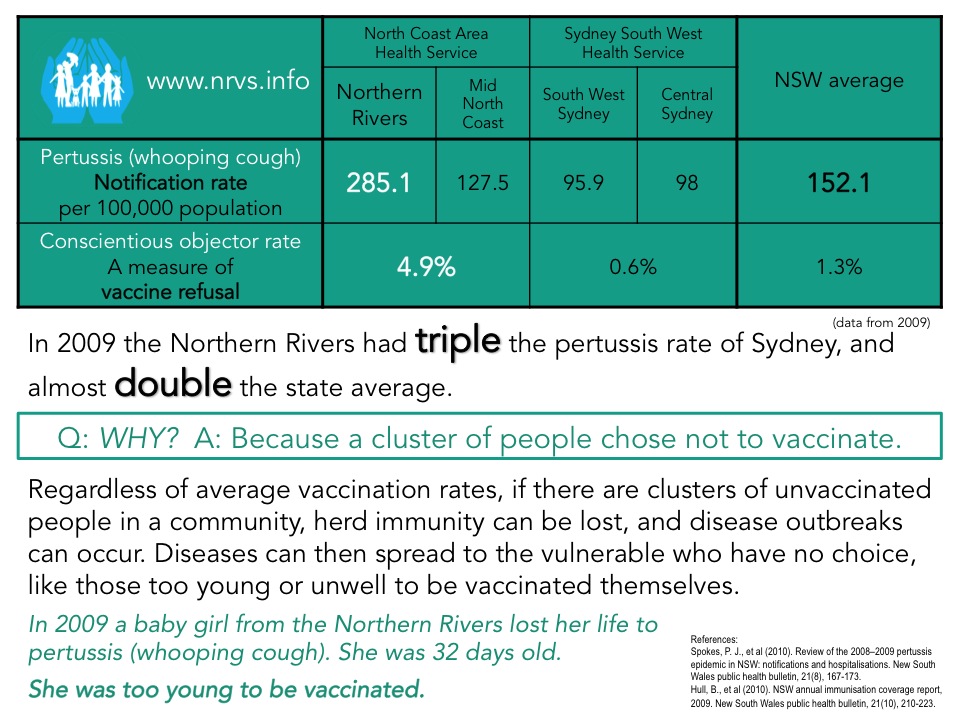 Here are some other ways that herd immunity can be demonstrated;

And once again - we have more data showing that covid vaccines are really good at preventing serious disease. This time out of the USA.I’ll keep this brief, because the data speaks for itself.On January 20, the CDC updated their COVID-NET data looking at the rates of laboratory-confirmed COVID-19 hospitalisations by vaccination status up to December 25.The data shows that in December, the monthly rates of COVID-19-associated hospitalisations were 16x higher in unvaccinated adults aged 18 years and older. In adolescents aged 12-17, the rate of hospitalisations were 9X higher amongst the unvaccinated.The chart attached shows the age-adjusted rates of COVID-19-associated hospitalisations by vaccination status in Adults Ages ≥18 Years from January–December 2021.It really speaks for itself.Are the vaccines actually stopping us from catching the virus? Clearly, they haven’t been as effective at providing sterilising immunity. This has been acknowledged, repeatedly.But what the vaccines are doing is reducing the risk of those with COVID requiring hospitalisation or dying from the disease. This has been made very clear by all the data sets.Would we love a sterilising vaccine? Of course! But we currently do not have this at our disposal. What we do have are vaccines which are preventing catastrophic levels of hospital admission and death. So whenever you are being bombarded by cherry-picked data from the anti-everything brigade, whenever you are being subjected to the false claims made by vaccines skeptics, always remember that facts matter. Evidence matters. Science matters.If you’re getting advice from people who shared the documented fake story about a young Australian child dying post COVID vaccination, you need to really find a more reliable source of reference.- SaraCDC Data Set covid.cdc.gov/covid-data-tracker/#covidnet-hospitalizations-vaccination ... See MoreSee Less
View on Facebook
· Share

"If you are triple-vaxxed, and you do your very best to ventilate a space and be careful about interactions, there are examples of people to have managed to confine an infection to one person. So, don't give up." ... See MoreSee Less

'Surely I've got it': When Nicola got COVID, her partner thought she was next. So why didn't she catch it?

An effective pandemic response requires clear rules and thresholds that tell us how to judge COVID-1...
View on Facebook
· Share

We recently shared a graph of outcome data stratified by age and vaccination status from the uk.The Guardian has just published a graph of the Australian data. It shows exactly the same trends — that vaccines are working really well at preventing serious outcomes from Covid. Link to graph of Australian data:www.theguardian.com/australia-news/datablog/2022/jan/21/australia-has-had-its-deadliest-day-yet-c...Link to graph of UK data: www.icnarc.org/DataServices/Attachments/Download/93440802-6975-ec11-913a-00505601089b ... See MoreSee Less
View on Facebook
· Share

Being vaccinated helps protect people from dying from covid. These graphs are from Our World In Data: two graphs side by side with up to date Australian statistics. • The x axis on both shows the date (from Feb 2021 to Feb 2022). • The y axis shows a rate: the graph on the left shows the vaccination rate, the graph on the right shows the case fatality rate (how many people who are known to have covid are dying from it). What these graphs show is that as the vaccination rate goes up, the rate of death goes down. Being vaccinated helps protect people from dying from covid. “Our world in data” is a resource that is free to explore for anyone. Link to it in comments. ... See MoreSee Less
View on Facebook
· Share

Q: if I get covid will I be protected and immune from catching it again?A: No. You can get sick with covid multiple times.www.theguardian.com/world/2022/jan/21/covid-reinfection-how-likely-are-you-to-catch-virus-multipl... ... See MoreSee Less
View on Facebook
· Share