Can vaccines cause or spread diseases?

Can vaccines cause or spread diseases?

Can vaccines cause “shedding”? (can they cause or spread the diseases they are meant to protect you from?)

No, with some extremely rare exceptions

In order for a disease to be spread;

Only some vaccines even have whole germs in them, most are made up of simple little pieces of the micro-organisms or inactivated toxins, and are therefore incapable of causing the disease in the person vaccinated, much less able to be passed on to anyone else.

There is a theoretical risk that live attentuated vaccines like the MMR can be found in body fluids (known as shedding), but that does NOT mean they are capable of causing the disease in the person vaccinated, much less being passed on, or causing disease in anyone else.

Even the most severely immunocompromised individuals can be around recently vaccinated people with all vaccines, the ONLY exceptions being the live polio vaccine (not used in Australia), and a few very simple precautions are needed for the chicken pox or rotavirus vaccine, or the influenza nasal spray (also not available in Australia).

The even longer answer!

A germ is an infectious microorganism, such as a bacterium or virus, capable of causing disease.

For a germ to cause disease, for someone to actually get sick from a bacterial or viral infection, the germ needs to be potent enough to overcome the defenses of that person, and then it needs to be capable of causing harm.

Virulence is the term used to describe how potent and dangerous a germ is, how likely it is to be able to overcome a healthy persons natural defenses, and then how likely it is to cause damage or sickness. Some germs are extremely virulent, and capable of breaking through even the strongest unimmunised defenses (vaccines boost specific immunity for some really virulent diseases, so your own body can be helped to be strong enough to defend against them). Other germs are opportunistic, and can only cause disease if the host defenses are somehow damaged or deficient, for example if they are immunosuppressed with disease or medication, or frail with old age. 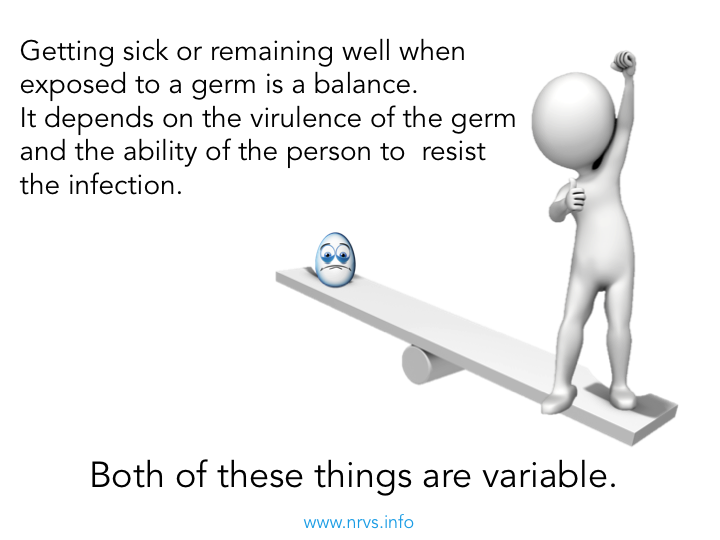 Vaccines increase the resistance of a person to infection.  They do this by showing the body’s own natural defense mechanisms what the really bad germs look like. That person’s immune system is then pre-warned, and when faced with a real threat it is primed, boosted and raring to go to fight off the germ. 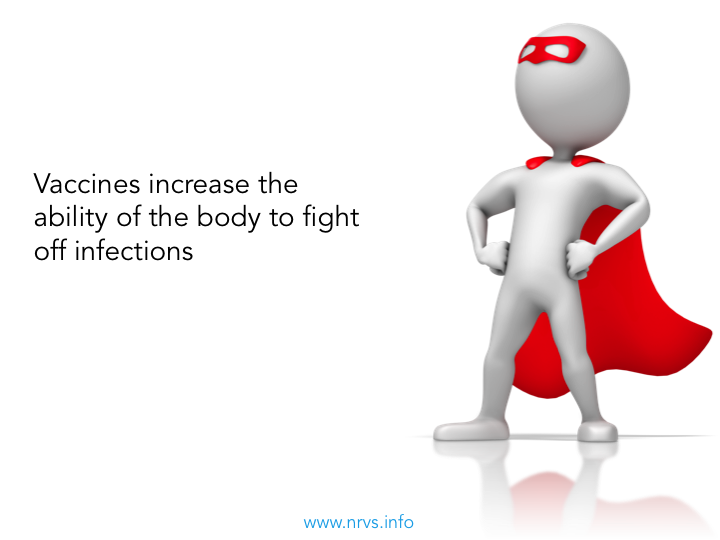 Transmission is when an infectious person passes a germ on to someone else. There are a number of ways in which a germ can be transmitted, for example, when a person gets sick with an infection they may cough or sneeze, and spray tiny particles laden with germs into the air via droplets. Or, germs in faeces, and vomit can be spread via contaminated surfaces such as bathroom taps and door handles. Other infections can be transmitted in blood between people through activities such as sharing needles or having sex. An infectious disease that can be transmitted between individuals is said to be contagious.

Shedding occurs when a germ that is infecting someone is then present in one or other of their body fluids, and could be transmitted to another person.

It’s important to note that not all germs are shed, shedding does not equal transmission, and transmission does not always cause disease.

To understand any risks associated with vaccines, is important to understand that there are different kinds of vaccines.

Vaccines can be described as being made up of subunit or split particles, toxoid, or being live and attenuated.

Subunit or split particle vaccines contain fragments of germs, not the whole thing. Some diseases are not caused by the germ itself, but by a toxin that the germ produces. Toxoid vaccines are made to prevent that kind of disease, and so contain an inactivated toxin (known as a toxoid), but not the germ itself. The toxins are inactivated and so are not capable of causing harm (Tetanus, and diphtheria are toxin mediated diseases, and the vaccines that protect you from them are toxoid vaccines).

These vaccines are enough to show your immune system what they need to be able to fight off, but it is utterly physically impossible for them to cause disease in the person receiving the vaccine. They are a bit like a ‘wanted poster’, they show the cops (the immune system) what they need to look out for and what to fight off if they see it, but they can’t actually cause the disease themselves. This of course also means that they cannot be shed, let alone be transmitted to cause disease in anyone else. 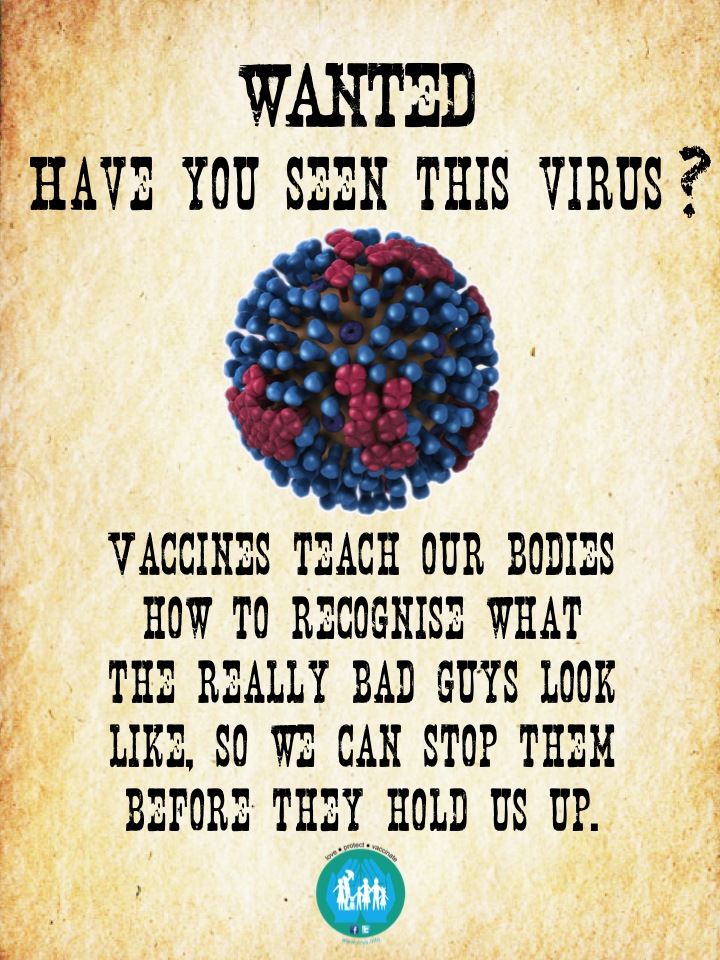 Vaccines in this category include those for:

Pertussis (whooping cough) – contains fragments of the bacteria and a small harmless section of the toxin. This vaccine CANNOT cause the disease, so cannot be shed or transmitted to cause disease in others.

Diphtheria – a toxoid vaccine (contains some of the diphtheria toxin which has been inactivated). This vaccine contains no bacteria , so cannot be shed or transmitted.

Tetanus – a toxoid vaccine (contains some of the tetanus toxin that has been inactivated). This vaccine contains no bacteria, so cannot be shed or transmitted.

Hepatitis B – contains only fragments of the virus, so cannot be shed or transmitted.

HiB – contains only the outer shell of the bacteria, so cannot be shed or transmitted.

Pneumococcus – contains fragments of the bacteria, so cannot be shed or transmitted.

Meningococcus – contains fragments of the bacteria, so cannot be shed or transmitted

Influenza injectable vaccine – contains fragments of the virus, so cannot be shed or transmitted

As described previously, in order for a disease to be spread;

In addition to subunit, split and toxoid vaccines there are also live vaccines. These DO contain whole germs. However, these germs have been attenuated, or weakened, meaning that their virulence has been removed. So even though live vaccine germs CAN be found in body fluids at times (ie they can shed), they are not only incapable of causing disease in the person vaccinated, they cannot cause disease in anyone else either. They are, however, similar enough to the germs found out in the wild so your immune system gets a specific boost as it gets shown what the real germs might look like, so is ready to fight off the dangerous infection should it come along.

The following are live attenuated vaccines:

And here are some further details about these individually.

Please note that the cases we have found are so rare as to have been individually documented and reported, out of all of the billions of doses of vaccines given. In other words, these are astonishingly rare events.

Measles – Although a theoretical possibility, transmission of the measles vaccine virus causing disease in someone else has never been found to occur. A thorough search of the literature could only reveal a few rare and isolated cases where vaccine strain measles virus caused a type of measles in the person vaccinated, and there is no documented record of anyone passing vaccine measles on to anyone else, in the entire history of using a live measles vaccine despite all the billions of doses given.

Here is one example of measles vaccine causing disease in a person whose immune system (their defense system) had been damaged with a stem cell transplant. There was no transmission to anyone else. There is been a second case of a child in Croatia who became ill with measles after vaccination, but again, did not cause disease to anyone else.

Rubella – In recently vaccinated mothers , the vaccine virus (and the antibodies to that virus) can be found in breastmilk, and in the noses of the babies being breastfed, but there is no evidence of it causing disease in the mother, baby or anyone else.

Varicella – Transmission of varicella vaccine virus is a rare event, but it can happen.

In about 15% of varicella vaccines given, a very mild form of chicken pox can occur (consisting of a few minor spots). This vaccine associated chicken pox cannot be spread by secretions or droplets such as coughing or sneezing, but weak viral particles can be found in the fluid of any blisters that may form. There is therefore a small risk that this weak form of chicken pox could be transmitted to another if they were in close contact with the blister fluid. This can be completely prevented by covering any blisters with clothing or a dressing, and enforcing simple hygiene measures. This occurs so rarely that, according to America’s Centre for Disease Control, out of around 55 million doses of vaccines given, there are only about 5 cases of people getting infected from contact with a vaccinated person. 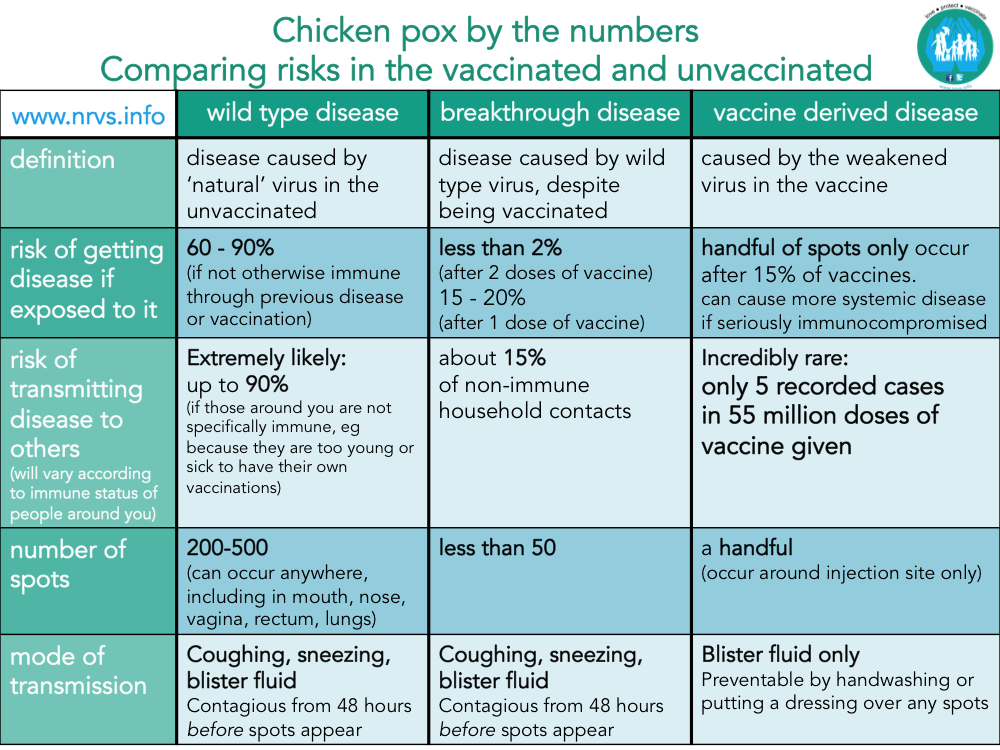 Rotavirus – The vaccine strain virus has been found in the stools of vaccinated infants, but in any cases where it has led to transmission to others, symptoms were very mild (showing that the vaccine virus has been effectively weakened and incapable of causing severe disease). Simple hygiene measures like handwashing after nappy changes and toileting negates the risk altogether.

Influenza nasal spray – Whilst this is not available in Australia, it is used elsewhere in the world. There has been ONE recorded case of transmission from the live attenuated nasal spray since it has been used. Hospitals used to restrict those who had a recent nasal flu vaccine from entering, but those restrictions were changed the year after the vaccine was licensed as it was found to be unnecessary. The only time someone who has had a nasal flu vaccine would be restricted is if they were to visit someone in reverse isolation (like a bone marrow transplant unit) in the hospital, and then it would only be for 5 days.

It is therefore virtually impossible for even live attenuated vaccines to cause the disease in the person given the vaccine. The viral particles are just not virulent enough, and therefore it is even less likely that they could go on to cause disease in others.

In medicine we ‘never say never’, but the possibility is vanishingly unlikely, so unlikely that even those in the same household as the MOST severely immunosuppressed people in the community (those who have no functioning immune system, for example after a bone marrow transplant) are advised to be vaccinated, as that way they can’t pass on the wild (natural) strains of the disease, with just some simple precautions around varicella and rotavirus vaccines. It is advised to not use the live polio or influenza vaccines, but neither of those are used in Australia anyway.

This is an extract from the Australian Immunisation Handbook giving details. 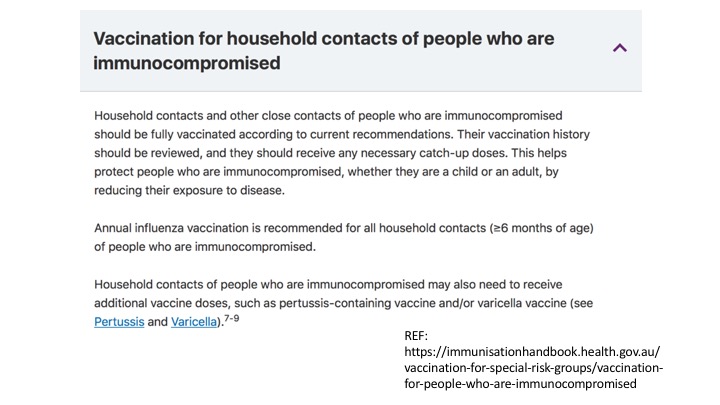 There is different advice if you are an immunocompromised individual needing a vaccination, but this is a highly specialist subject and needs to be tailored for the individual circumstance by treating medical specialists.

There is a reference that vaccine critics like to share as “proof” that vaccines cause disease via shedding, which is an out-of-date reference from The Johns Hopkins Sidney Kimmel Cancer Center. Here is a statement from Johns Hopkins with their current recommendations. 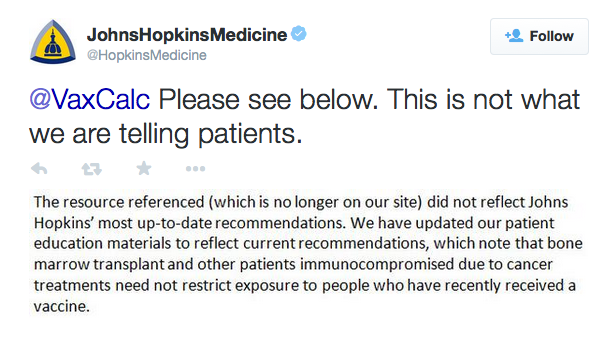 The bottom line is, if you are seriously that concerned about shedding and the potential of catching disease from a weakened, attenuated, particle, you really should be far more concerned about the ‘wild type’ natural diseases that ARE virulent.   They can cause potentially deadly disease in otherwise young, healthy and fit people. Young infants, children or adults do not need to be kept away from anyone who has been vaccinated, no matter what the vaccine.

Vaccines protect you from dangerous diseases.

They neither cause them, nor transmit them.